Here is the last electoral map I'll do before the election: 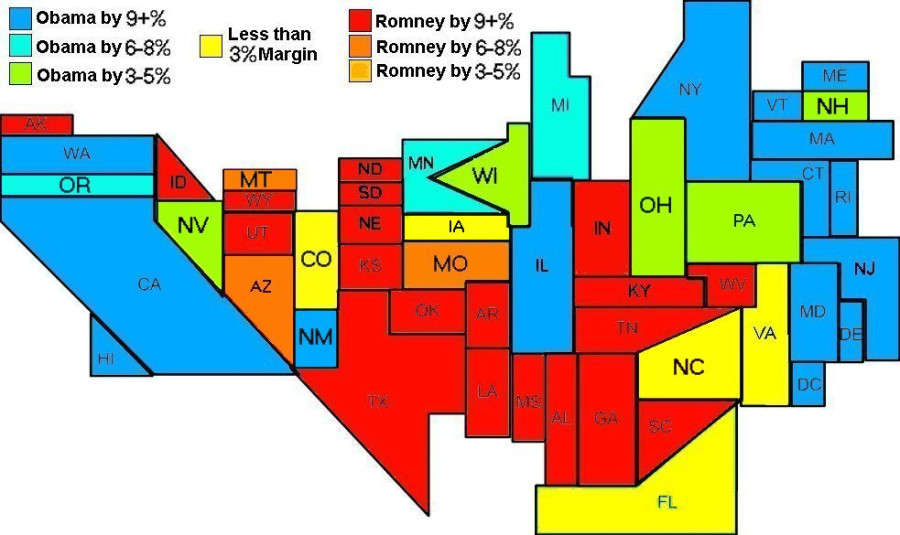 The changes from last time are:

The big news is, with Nevada, New Hampshire, and Ohio moving to a greater than 3% predicted lead for Obama, the projection would now indicate that he's likely to win at least 275 electoral votes, which is 5 more than necessary to clinch the election.

If one were to predict the outcome in the yellow states within the 3% margin, it looks like Obama will win Colorado, Iowa, and Virginia, while Romney will win Florida and North Carolina. This would give Obama 303 electoral votes to Romney's 235. But Obama's electoral vote count could be as low as 275 or as high as 347. Nate Silver currently estimates that Obama will have 50.6% of the electoral vote to Romney's 48.5%.

These are all statistical probabilities, of course. People's actual behavior could be different. Notably, people who read data like this (on both sides) might be dissuaded from voting by thinking the outcome is certain, which itself would change the outcome. An 86% probability of winning (what Nate Silver currently gives Obama) is not 100%. It's the equivalent of betting that a dice player won't throw a 7 on the first roll -- you'll probably win, but you could lose.